Following this project will provide you with:

Sign Up
Hooray! This project was successfully funded on September 24, 2013.

By Karan Jain on NURISH Food + Drink by NURISH

We hope this update finds you all well. We just wanted to let you know about some great news about Nurish Food + Drink!

For those of you who haven’t heard, NURISH recently received an $85,000 grant from the District's Great Streets program and plans to use the funds to expand the cafe, buy more equipment, and serve up further goodness in the heart of Anacostia.

The best part of it? You all who helped make it happen get a very near and dear shout out from Kera herself:

"She would not disclose start-up costs, but said she raised $15,000 using the Web site Clovest, and took out a bank loan to finance the rest of the business."

Read more about the great things she has been up to and pat yourself on the back for helping make small business dreams come true! Here's a link to the full article: http://www.washingtonpost.com/news/digger/wp/2014/09/19/anacostia-cafe-serves-up-expansion/

Congratulations, NURISH! We’re all proud to be a part of your growth.

Thanks to one final generous contribution (Thank you, Duane!), we reached our goal this afternoon. Thank you so much for your generosity and support. You should all feel good about your role in making this happen; hopefully, NURISH is just the beginning of a string of new businesses in Anacostia. Although we've reached our goal, there are still a few hours left of the campaign so don't stop encouraging your friends and family to join in. Again, thank you. We hope to see all of you on opening day!

Hey, NURISH supporters! There is just one day left of the extension period to get to our $15,000 goal. We're just $1675 shy of our target so please make one final effort to get more supporters on board. Spread the word to your mates and colleagues! We have until midnight tomorrow --I can't do it without you.

Wow. What a ride the past 72 hours have been. On behalf of all of us at NURISH and the Arts Center, we want to truly express how impressed and grateful we are that so many of you came out to help NURISH reach it's funding goal.

In fact, this funding push was so convincing, that Clovest will be extending the campaign for another two weeks! Though we're incredibly excited about this opportunity to reach our goal, keep in mind we still need to get another $3,625 in pledges by August 15. So be sure to share this with your friends and fellow supporters in the community. We're very close to receiving our loan and are extremely excited to make the cafe a reality with your support!

We also want to encourage those of you who will be in town to attend the closing events of the Lumen8Anacostia summer festival. The finale will take place on August 10 and will feature live music, light-up dance performances, art exhibitions, a pop-up restaurant from Los Verracos, and more. It will be hosted in the Arts Center itself, so come check out the space you've just invested in and please join us in celebrating Anacostia!

So many of you have come through for me in the last couple of days. We're so close to our goal so don't give up! Tell your friends and anyone you know who lives in or near Anacostia, or anyone who cares about local economic development. Let's make it happen!

Thanks to our 31 supporters so far! We're about halfway to our goal and have just ONE MORE DAY to get the loan needed to open the cafe!

Clovest recently interviewed me to learn more about my background in running Domku Cafe in Petworth and why I think it's important to open the NURISH cafe in the Arts Center.

Read the interview below, share it with your friends, and help us reach our fundraising goal to open a new community-funded cafe in Historic Anacostia!

An interview with Kera Carpenter 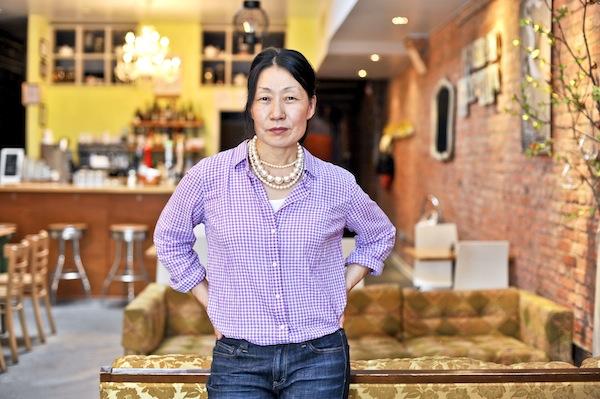 Kera Carpenter, owner of Domku + founder of NURISH, inside Domku Cafe in Petworth

Clovest: You opened Domku eight years ago in Petworth. Why?

KC: I wanted to open a restaurant close to home. When I bought a house on this side of town, I was frustrated by the fact that there was nowhere to grab dinner or a cup of coffee without getting in my car and driving to another part of the city. I thought with all the people moving into this part of town that I couldn’t possibly be the only person that felt this way. When a friend of mine told me about this space, it seemed like the perfect location to open a business.

Clovest: When you first opened, what was the reception like?

KC: It was great! I had a lot of support. I had some resistance from the older community, but for the first two years, roughly 80% of my customers were regular locals. Most people in the restaurant business thought this probably wasn’t a wise decision, but once I was established and they saw how the neighborhood was changing, little by little they started to come over here. It’s still not as good as I’d like it to be but it’s definitely improving.

Clovest: Did you host events for the community?

KC: A lot compared to most places. When I first opened I began the Upshur Street Arts Fair, and that was held in Domku for the first four or five years, but as it got bigger we moved it to the street outside. It features DC based artists selling crafts as well as local food vendors. It’s become a Petworth tradition.

Clovest: After 8 years of running Domku, why open a café in Anacostia?

KC: I would have to ask, why not Anacostia? It’s changing just like every other part of the city. Maybe not as quickly, but people there want to have good food and drink just like anywhere else.

Clovest: The NURISH café has been introduced to local residents through a pop-up night held in the Arts Center as well as through presentations you've given at community meetings. How did the community feel about the cafe at those events?

KC: People are really craving for things to do in Anacostia. When Arch or whoever holds an event, they get a really great turnout because people want to support anything that’s new and exciting going on in their area. During the pop-up night, I think we served about 150 meals in a short amount of time, which is great. We had positive feedback from all the people who ate the food, and great feedback in particular about the food vendor, and that’s part of the goals of NURISH – to nurture new food entrepreneurs. 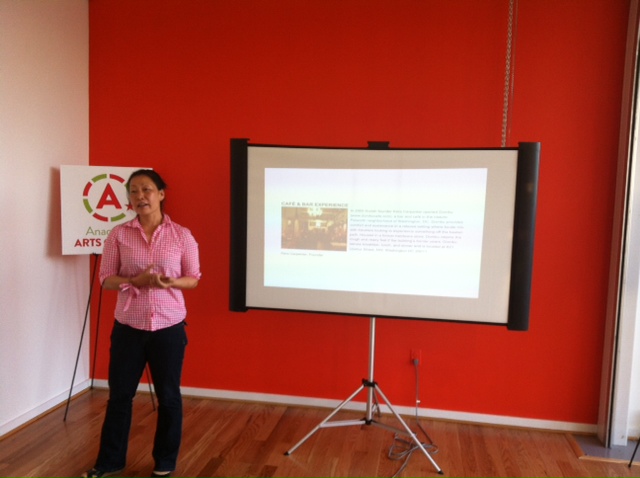 Kera presenting her vision for the NURISH cafe at the Arch Development Corporation's spring community meeting.

Clovest: That’s one of the things we’re most excited about with this café. Given your background with StartUp kitchen in conjunction with Think Local First, what are your initial plans for incubating food vendors in the southeast?

KC: 15% of the proceeds from the café will go toward a youth program that will eventually be housed there. Once the café is established, the pool of funds collected will be used to train a small group of young adults who are interested in food careers, and being entrepreneurs in the food business. They’ll go through a series of workshops about food, health, finances, and the business side of things, and get on the job training from running the café for a period of time. If they need assistance getting placed in culinary school or a job somewhere, we will assist with that.

Clovest: Why did you choose to use Clovest to finance this café?

KC: I liked your focus on community and small-scale projects. For a lot of small businesses it’s hard to get funding from traditional avenues, and a lot of people are using other crowdfunding options like Kickstarter and GoFundMe, but the great thing about what you guys offer is that you manage everything. We don’t have to keep track of tote bags and coffee cups and pens and things like that. I have a hard time asking people to give me money, and promising to pay them back makes it more palatable. It’s a loan, not charity.

Thank you, VSAG, for your generous support! It's great to have the support of an organization dedicated to good food and with a history of giving to communities.

Thanks to our 18 supporters so far

Many, many thanks to all the folks who've pledged their support for NURISH so far! Can't tell you just how much I appreciate every single dollar. As of yesterday, we have reached just 17% of our goal --not bad but with still a ways to go! What will that 17% do? Buy a refrigerator to store all those fresh ingredients for our made-to-order salads and sandwiches, house-made pates and terrines, and some pretty fancy shmancy desserts.

Loans are repaid to Funders on a quarterly basis (unless businesses choose to repay them faster).

At Clovest, our partners are our lifeblood. In fact, nearly all of the businesses that have raised funds on Clovest belong to one of our partner organizations. As a way to give back to these great organizations, we created Clovest Communities (and affiliate badges) as a way to highlight the support these organizations provide to our favorite local businesses.

If you're an organization that is dedicated to helping the growth of small, local business, or are interested in learning about the benefits of becoming a Clovest Community partner, get in touch with us at [email protected] to find out more about how we can work together.

If the café receives its fundraising goal, the café will contribute 15% of its profits to its parent nonprofit, NURISH: The Center for a Creative Culinary Economy, which will operate an entrepreneurial training program for young adults in Anacostia who have a passion for the food business.

At Clovest, we value communities. A lot. So instead of offering individual rewards, we work with businesses to find a unique reward that will benefit the entire community. The community reward has three core goals:

Community rewards are the businesses way of reinvesting in the community that has just invested in them.

While the project's goal is the amount the business must raise in order to receive a loan, the overflow is an amount they can borrow beyond their goal.

Another way to think about this is:

If the business does not meet its goal, no loans are funded and no money exchanges hands. Regardless of the amount they raise, a business is still obligated to repay its loan in full.